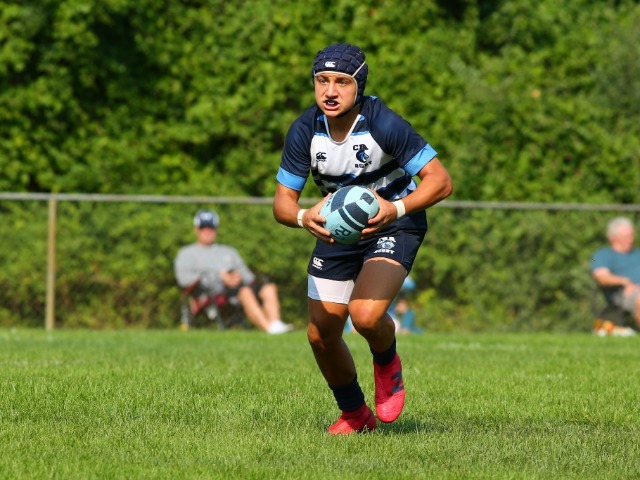 Christian Brothers Academy hosted the fifth and final week of the New Jersey Sevens Rugby Tournament on October 23, but the home-field Colts needed a big rally to ultimately win the day.

CBA started the day slowly and quickly lost junior hooker Nathan Crawford to a hamstring injury when scoring against the Highlanders in a 17-10 win.

The Colts then won 32-0 over St. Augustine's second team, but the rainy conditions halted CBA in the game against Morris, dropping that contest 10-5. The loss set up a must-win final against St. Augustine's first team.

Going into the final game against St. Augustine, CBA struggled with one starter ruled out and the rest of the squad carrying knocks. The Hermits started the first half with two tries to go up 12-0, and CBA was finding it hard to maintain its defensive integrity against St. Augustine's offloading game.

CBA answered with a try from senior Kyle Krebs, converted by senior TJ Meehan. CBA ramped up the pressure and came close to breaching the defense only to turnover the ball and concede a well-worked try well into referee time.

The second half was a story of the Krebs brothers. First, Kyle Krebs showed massive strength to score under the posts with 4:13 left in half. CBA then had a couple of good attacks that St. Augustine repelled. Luke Krebs had an impressive run into the 22, but was ruled out of bounds. St. Augustine cleared from the lineout, but the wing strayed offside on the kick, and CBA had a penalty in front of the posts. Meehan found Luke Krebs on the wing in a one-on-one situation, and Luke stepped over his opponent to score with no time left on the clock.

"I asked the lads to dig deep into their reserves in the final," head coach Pat Moroney said. "All of them were hurting at the end, but their tenacity under pressure was outstanding. The parents and families supported us well and our new facility at CBA allow us to showcase the Fall Sevens Series on campus."