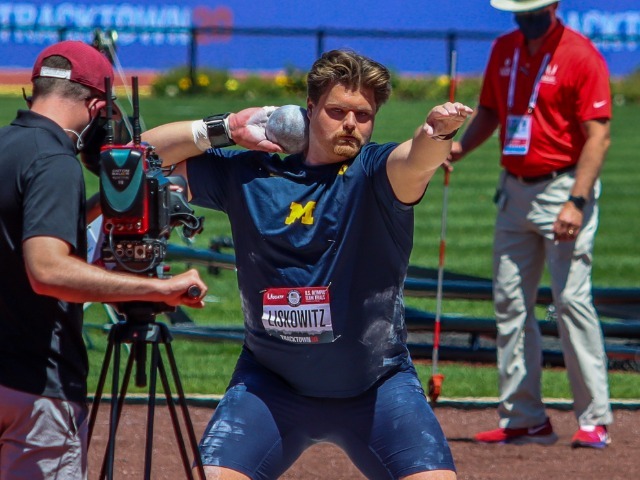 Christian Brothers Academy had a representative at the U.S. Olympic Trials in track & field earlier this month.

Andrew Liskowitz ’15 traveled to Eugene, Oregon to participate in the men’s shot put trial, having qualified in the spring of 2019 in an event at the University of Michigan.

His journey from young CBA thrower to Olympic Trials participant did not just happen overnight, and he knows how important his CBA foundation has been to his success.

“I originally wanted to play hockey at CBA, but after freshman year, I knew I wasn’t going to make the cut,” Liskowitz said. “While I did track my sophomore year, I didn’t really enjoy it. It was before my junior year that I changed my mindset and realized I could make something out of the sport.”

Using motivation from the talented distance runners and field athletes around him, Liskowitz upped his effort level in the shot put and discus throws. It was between junior and senior years at CBA where he made the big jump to a Division I level talent.

Liskowitz still holds the CBA record in discus throw at 183-10.

“The thing I liked the most about CBA was the mentality that you were always trying to be the best you could be, and that’s something that has stuck with me.”

He took his talents to the University of Michigan, where he became a six-time All American between indoor and outdoor track & field. Just weeks before the Trials, Liskowitz finished fourth at the NCAA Outdoor National Championships, earning first team All American honors. It was the highest shot put finish by a Michigan athlete since 1957.

While the pandemic delayed his big moment by a year, Liskowitz used the extra time to prepare for the Trials.

“The Trials was easily the coolest competition that I have ever been a part of. I was definitely confident heading into the Trials. I made some minor adjustments, practiced them, and felt I was ready to go.”

The Michigan alumnus easily advanced from the preliminary round to the final round, throwing 20.2 meters. The top-seven finalists all had reached the Olympic standard prior to the Trials.

“Ironically, I technically qualified for the Olympics, but seeing as the U.S. is so competitive, you still need to get top three among those Olympic standard throwers,” he said. “All seven of us were really talented, so it was a tough competition.”

Ultimately, Liskowitz fell just short of qualifying for the Olympic Games, throwing 20.9 meters in the finals which was good for sixth place. The third place finisher threw just one meter more than him, showing just how tight the competition was.

"Watching Andrew is endlessly inspiring," said CBA throws coach Andrew Cusick '06. "I got choked up watching him throw and who wouldn't? He gives our program meaning and purpose and life. I am so happy for him, and honestly, I'm looking forward to 2024."

Liskowitz does not rule out trying to qualify for the 2024 Olympic Games, but as for his efforts at these Trials, he knows he put forth his best effort among world-class competition.

“Going into the final round, I reminded myself about all the work I had put in up to that point and told myself leave it all out there. The more I competed at the highest level, the more respect I gained for all these talented throwers. It was an amazing experience.”