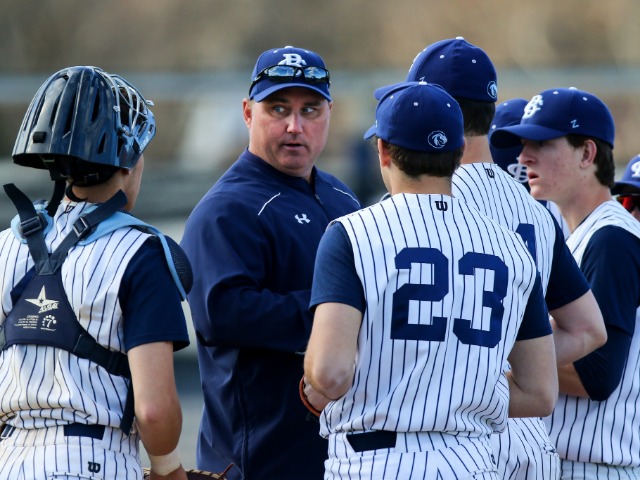 The Christian Brothers Academy athletic department is pleased to announce the hiring of Marty Kenney, Jr. ’90 as the new head baseball coach.

Kenney, Jr. has been an assistant coach for CBA on three separate occasions, including most recently from 2015 through 2019. He will follow in the footsteps of his father, Marty Kenney, who won a resounding 832 games and 27 tournament titles as CBA head coach from 1974 to 2019.

“We could not be more excited to build upon the great tradition of CBA Baseball with Marty Kenney, Jr.,” Director of Athletics Vito Chiaravalloti said. “Coach Kenney understands the mission of the Academy and is committed to developing not only great baseball players, but young men of character and integrity.”

Kenney, Jr. has played an integral role in coaching the Colts to plenty of success since 2015. He helped guide CBA to the 2015 Non-Public A State Championship, 2015 and 2016 Shore Conference Tournament titles, three Monmouth County Tournament wins, and three division titles.

“It isn't possible to express the gratitude and excitement that I feel to be able to build upon the tradition that my father and our alumni worked so hard to develop,” Kenney Jr. said. “I look forward to growing and enhancing the baseball program in a way that will continue to make our school, baseball alumni, current players, the fans and my father proud.”

Prior to his recent stint as CBA assistant coach, Kenney, Jr. was a coach for three different professional teams in the Minor Leagues, including the Evansville Otters, Kansas City T-Bones, and Schaumburg Flyers. With each team, he was in-charge of player development and community outreach.

From 1998 through 2005, Kenney, Jr. was the associate head coach at his alma mater, DeSales University. A nationally-ranked Division III program, he was a part of the coaching staff that led DeSales to seven-straight conference titles and a berth in the 2003 Division III College World Series.

Other baseball positions have included helping his father lead Kenney’s All-Shore Baseball Academy, one of the premier baseball camps in the area, and serving as Director of Pride of the Diamond for the Neiman Sports Group, where he originated the Lehigh Valley Fall High School Baseball League.

“High school baseball has some unique challenges in today’s game, with the growing number of travel programs, an increased focus on arm-injury prevention and pitcher maintenance, and the importance of developing players for the collegiate level,” Chiaravalloti continued. “We wanted someone who understood those challenges. Coach Kenney has proven to have the expertise to navigate these challenges and we are confident that he will take CBA Baseball to the next level.”

His full attention now turns to continuing to develop exceptional Colts baseball players and winning plenty of games at CBA.

“I want to ensure that my staff and I continue to support our players’ physical and mental growth,” Kenney, Jr. said. “We want our players leave CBA stronger, more prepared and more mature than when they entered.”

And as a CBA baseball alumnus himself, Kenney, Jr. knows how special the bond can be between the current program and decades of passionate alumni.

“I want to empower our players and alumni. It is important that our baseball alumni feel that they are still part of the program, which we will continue to stress,” Kenney Jr. said. “When our alumni are involved, our current players can better understand the responsibility of representing the Academy and our baseball program not just today, but into the future as well.”

Kenney, Jr. will be ready to lead the Colts come March when the spring baseball season opens.