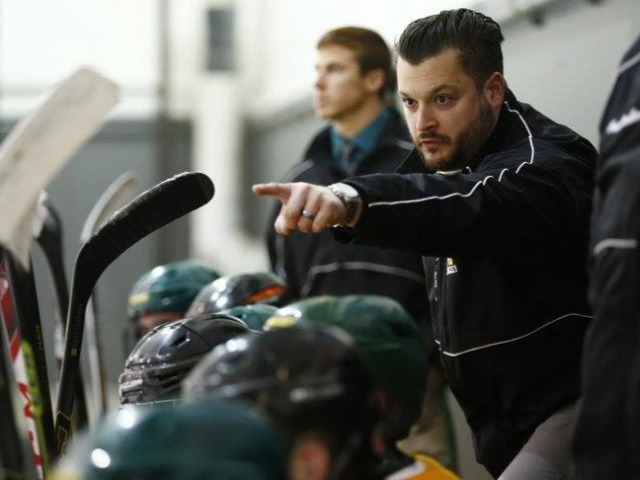 Christian Brothers Academy is pleased to announce that Andy Gojdycz ’96 has been selected as the new varsity hockey head coach.

Gojdycz has had a decorated career in the sport since his days as a CBA Colt in the mid-1990s, when he won three straight state championships as a player in 1994, 1995 and 1996.

“We are very excited to welcome Andy back home to Lincroft,” Director of Athletics Vito Chiaravalloti said. “During the search process, Andy stood out as the ideal candidate to build upon the proud traditions of the CBA hockey program. We loved his energy and were inspired by his vision for the program. We know he will have a positive influence on our students and we can't wait for him to get started."

Gojdycz has coached high school hockey for the past 17 years, including stops at Hightstown (2002-04), Hunterdon Central (2004-10), and Montgomery (2015-19). He won conference championships at both Hightstown and Hunterdon Central and was the 2009 Star Ledger Coach of the Year.

He also served as the Rutgers University head coach from 2002 to 2015, where he built the Scarlet Knights’ program into one of the most respected American Collegiate Hockey Association (ACHA) Division I teams in the country. Rutgers qualified for four ACHA national tournaments and won five regular season conference titles under Gojdycz.

“I am honored that Christian Brothers Academy chose me to continue the school’s storied hockey tradition,” Gojdycz said. “As an alumnus, it is a privilege to be named the head coach of CBA Hockey and I am excited to start building towards our eighth state championship.”

Gojdycz is also the commissioner of the Northeast Collegiate Hockey League, a member of the NJSIAA seeding committee, and an associate coach-in-chief for the coaching education program in the Atlantic District of USA Hockey.

But not surprisingly, his hockey roots trace back to Lincroft, where he was a standout player for head coach Mike Reynolds during one of the greatest spans of hockey in CBA history. Aside from the three state titles, Gojdycz’s teams won three straight Gordon Cup Championships and three consecutive Star Ledger Trophies for Team of the Year.

After graduating from CBA, Gojdycz played for Rutgers from 1996 through 2001, where his Scarlet Knight teams qualified for two ACHA national tournaments. He was an ACHA All-American in 1998 and remains the all-time defenseman leader in overall points.

Gojdycz and the Colts will get to work come November tryouts, with opening day slated for late November.