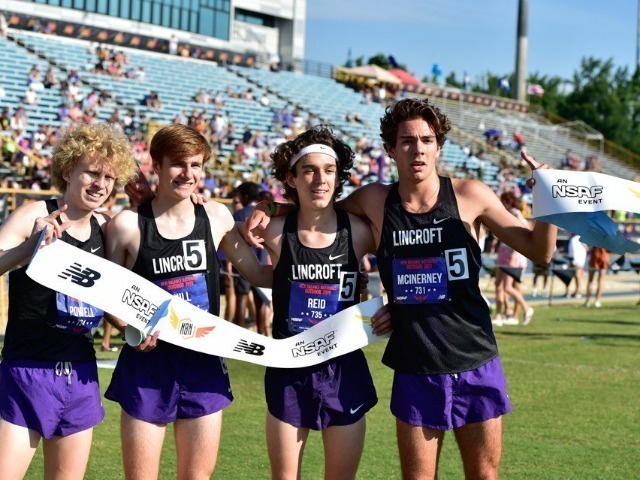 After winning multiple team championships throughout this spring, the outdoor track & field season wrapped up at the New Balance Outdoor Nationals this past weekend in Greensboro, North Carolina.

CBA entered athletes in multiple events, but it was the distance runners who stole the show.

They won the national title by nearly six seconds over the second place team from New York. With the title, each of the runners earned All-American status.

Later on Sunday, the Distance Medley Relay foursome also earned All-American status with a fifth place finish in the event. The team of Powell, Rafa Coppola, Tristan Amell and McInerney turned in a time of 10:13.18, which was an impressive mark after an early race baton drop. A quick recovery and great legs by Amell and McInerney allowed CBA to reach the podium.

"It was an incredible weekend with so many amazing CBA performances against great competition," head coach Karl Torchia said. "Many of our seniors stole the show this weekend and we will miss them tremendously next year. Our 4xMile team was incredible and they earned that All-American status after a year of hard work."

O' Hara ran a personal-best 53.22 in the 400 hurdles, laying further claim to his junior record and cementing himself as the number two returner in New Jersey for 2020. Freshman Robert Williams competed in the shot and underclassmen Jason Asare and Ethan Ferraiola gained worthwhile experience on the relays.

"It was absolutely the distance guys who led the way at Nationals, but I couldn't be more proud of the throwers this season. 2020 should be fun if the team is ready to work," throws coach Andrew Cusick said.

While there is plenty to be excited about for 2020, the Nationals serve as the send-off for dedicated seniors Nick Morse, Reid, Nate Giallanza, Coppola, Arce, and McInerney, who all competed for the last time as Colts.

CBA finished its outdoor season with the New Jersey triple crown: state champions in cross country, indoor track, and outdoor track. They’ll look to continue their tradition of success next year with a mix of returning and new faces.