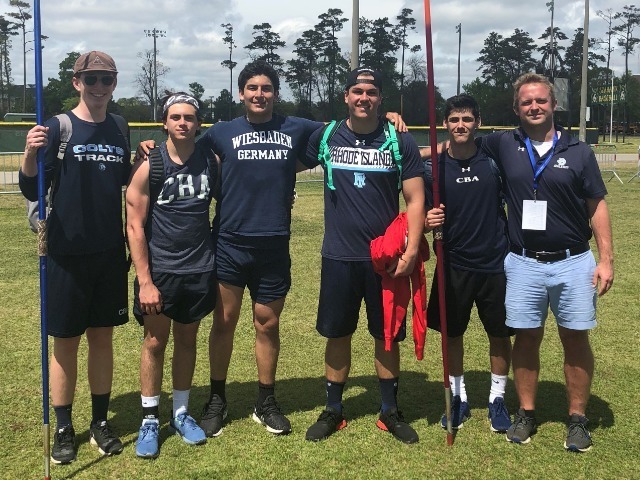 This past weekend, a group of CBA Track & Field throwers flew south to Myrtle Beach, South Carolina to participate in the Beach Run Invitational.

Senior Nick Morse and junior Eros Bottino picked up second and fourth in shot put and second and fifth in discus. Morse turned in his second best throw of his outdoor career with a 55’5 1/2. Junior Bruce Martin also picked up a personal best in the discus.

Bottino delivered the highlight of the weekend in the discus, hitting 162’4 3/4, a new junior record and plenty good enough to qualify him for the prestigious Penn Relays.

The javelin throwers kicked-off the season with an impressive showing, which bodes well for championship season in May and June. Junior Chris Arias finished first with 150’8 and sophomore Andre Terrone was second with 150’7, just one inch behind Arias.

“I think we’re still working on learning how to compete in unfamiliar scenarios, but the future looks bright," said throws coach Andrew Cusick. "The stronger we perform at more elite meets, the better we will get. I’m really proud of all of the boys and looking forward to what’s going to be a great season."

With Bottino qualifying for the Penn Relays, the Colts now have two throwers headed to University of Pennsylvania later this month. Morse had previously qualified in the shot put event.

In fact, the duo continues a nice streak for CBA throwers, as they've had a qualifier in every spring since 2014. Bottino will be the first discus thrower since 2010 to compete in the Penn Relays for the Colts.