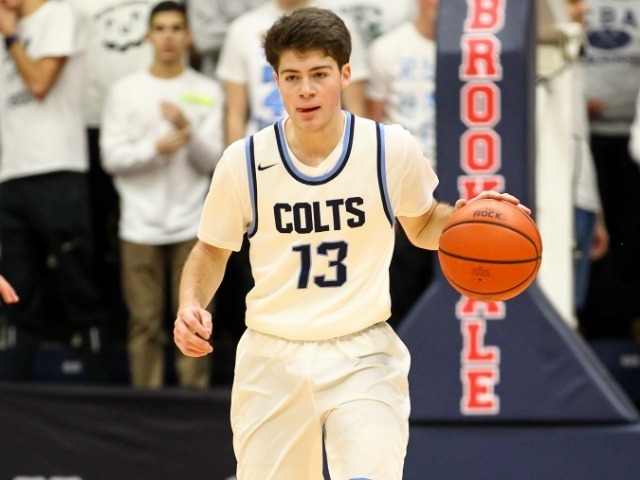 The smooth shooting wingman scored his 1,000th point in the first quarter of a 78-47 win at Freehold Boro, which clinched the A North Division for CBA.

"It means a lot to me to score 1,000 points here, especially since CBA is a basketball powerhouse," Braunstein said. "As a kid in middle school, I always wanted to play for CBA. All the hours of hard work in have paid off and I couldn't have accomplished this goal without my teammates and coaches."

Braunstein joined the varsity team as a sophomore, immediately finding a role as a sharp shooter. During his junior season, he led the Colts in scoring with 16.3 points per game. This year, he is scoring better than 17 points per contest.

"Each year at CBA, I've had great coaches and teammates who have pushed me to become a better basketball player and leader," Braunstein said. "The culture of the team is great, which has helped me become a better teammate, too."

His development as both a player and a leader has not gone unnoticed by head coach Geoff Billet.

"With a fairly young team this year, Stephen's leadership has been outstanding," Billet said. "He epitomizes what it means to be a student-athlete at CBA. He plays the game the right away, helping his teammates succeed and leading us to wins."

Braunstein joins his teammate and fellow senior Josh Cohen as the first pair of teammates to reach 1,000 points in the same season. Cohen netted his 1,000th point on January 24th, and the duo's connection goes further than their CBA accomplishments.

"It's been fun playing with Josh for the past three years on varsity," Braunstein said. "I've been teammates with Josh since fourth grade, so it's really special that we both got this milestone together."

Now, Braunstein and the Colts look to carry their momentum into the postseason. CBA will open the Shore Conference Tournament on Thursday afternoon at 4:00 p.m. as the number three seed. They will play the winner of Jackson Memorial and Pinelands.

"We are ready to make some noise in the postseason because we have a great mix of guys this year," Braunstein said. "We had a great regular season and proved throughout the year that we could play with anyone in the state. We are very confident and we are excited to go prove that."