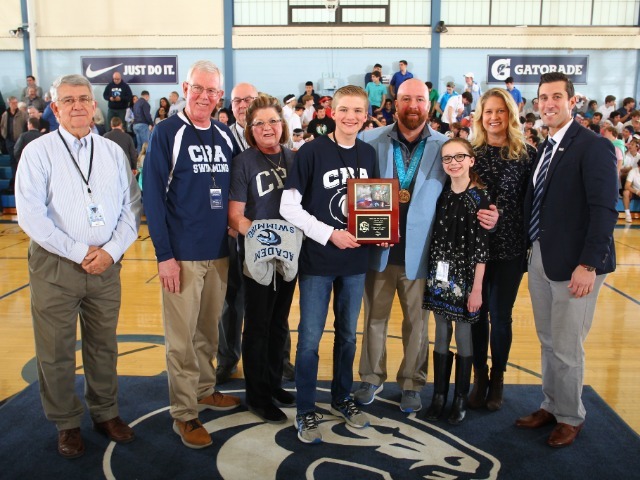 In a long list of impressive athletes who can count themselves as CBA alumni, only one man has an Olympic medal: Tom Wilkens.

Wilkens, a member of the CBA Class of 1994, was added to the Athletics Ring of Champions during The Founders Cup basketball game between CBA and RBC on Saturday afternoon.

The decorated swimmer won a bronze medal in the individual medley at the 2000 Summer Olympic Games in Sydney. He also participated in the 200 meter breaststroke event and served as U.S. Swim Team Captain at the Sydney Games.

Prior to his Olympic glory, Wilkens was a standout swimmer at CBA, winning two individual state championships in the 200 IM and 100 Butterfly. He was also a member of the inaugural varsity swim team in 1991.

“CBA is a special place,” Wilkens said. “My time at the Academy had a profound impact on me. I will always have CBA to thank for my past, my present, and the rest of my life.”

He went on to swim for Stanford University, where he won five individual national titles, won the 1998 NCAA Men’s Swimming National Championship, and was the Stanford team captain during his senior season.

Wilkens was named to the Pac 12 Conference All-Century Team in 2016 for his outstanding accomplishments in the pool at Stanford and on the National Team.

His other swimming highlights include winning a world title and setting an American record in the 400 individual medley at the 2002 World Championship in Moscow.

On Saturday, he was joined at center court by his wife Stephanie, his son Bryce (Class of 2023), his daughter Kacey, and his parents Pete and Laney.

Wilkens was presented with the honorary blue Ring of Champions jacket, a commemorative plaque, and a banner to hang in the Varsity Gym for years to come.

“Becoming part of the Ring of Champions is an incredible honor and I am humbled by this recognition,” Wilkens said. “This means a great deal to me, and it was special that I had the opportunity to share this amazing ceremony with my close family & friends, my swim team family, and my CBA family.”

The Ring of Champions was introduced in 2015, when longtime champion basketball coaches Vinnie Cox and Ed Wicelinski were the inaugural members. NHL player Trevor van Riemsdyk (CBA ’09) was later added after winning the Stanley Cup with the Chicago Blackhawks.