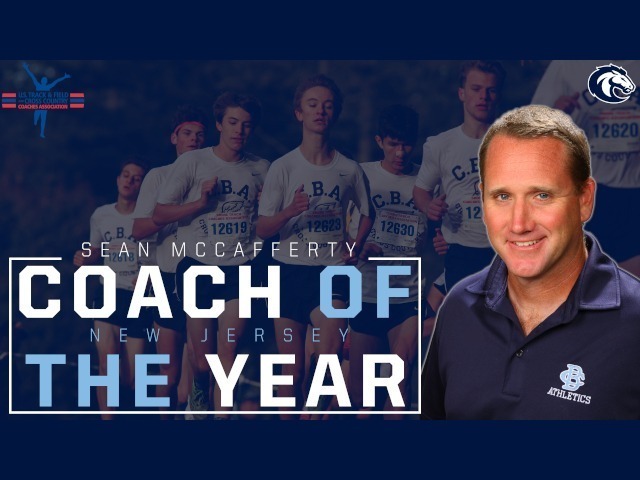 For the second time in two years, CBA Cross Country head coach Sean McCafferty has been selected as the New Jersey Boys Coach of the Year, announced last week by the U.S. Track & Field and Cross Country Coaches Association (USTFCCCA).

McCafferty led the Colts to another banner season on the trails, racking up five major championships this past fall.

The Colts' win at the Nike Northeast Regional advanced them to the Nike National Championship for the ninth consecutive year.

The fourth-year head coach took over for Tom Heath in 2015, winning the Meet of Champions in his first year as head man. He has coached CBA as they have extended their dual meet win streak to a national-best 362 straight.

ABOUT THE USTFCCCA AWARD PROCESS
The USTFCCCA committee of national experts selects one boys coach and one girls coach from each of the 50 states and the District of Columbia for their successes during the fall of 2017. Among the factors taken into consideration were team score and placement at the state championships, margin of victory, performance against rankings if available, individual championships, and how their teams’ performances stacked up to previous years.

The winners from each state are in consideration for the association’s National High School Cross Country Coach of the Year award. One boys coach and one girls coach from among all the states will be selected by a panel of experts and be announced later this month as the national winners.