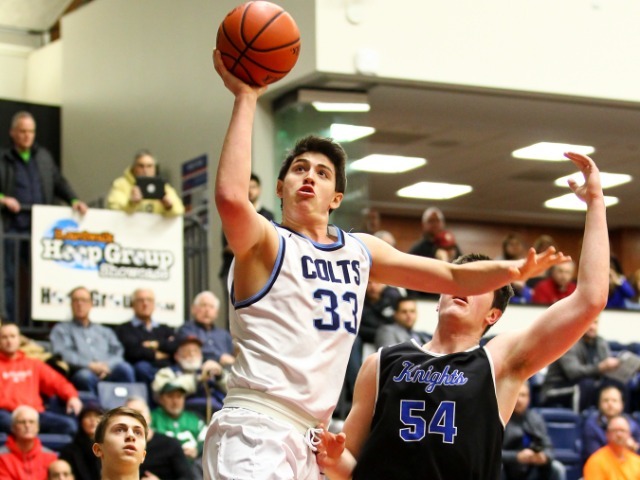 Senior Josh Cohen etched his name in history on Thursday night, becoming the 19th player in CBA Basketball history to score 1,000 points in his career.

The 6'11" center scored his 1,000th point in the first quarter of a 74-72 win at Middletown South. Cohen finished with 31 points to lead the Colts to an important division victory.

Cohen is the first player to reach 1,000 points since Pat Andree did so during his junior season in 2015. Andree, who graduated in 2016, would go on to become CBA's all-time leading scorer with 1,984 points.

"Josh has worked extremely hard over the last four years to develop into one of the top centers in the state," head coach Geoff Billet said. "After starting out as a six foot freshman, and seeing his development into a Division I committed senior, it has been one of the best experiences of my 20-year coaching career. We are all extremely proud of Josh for his accomplishment and look forward to adding his name to our 1,000-point banner."

Cohen joined the varsity team in his sophomore year, immediately showing promise as a starting-caliber center in a competitive Shore Conference.

In his current senior campaign, Cohen is top-10 in the Shore in scoring at nearly 22 points per game. He also averages more than 12 rebounds and 1.5 blocks per game.

Cohen signed his Letter of Intent to play basketball for St. Francis University (Pa.), which plays in Division I's Northeast Conference. He's also the first basketball player to commit to a Division I school since Andree.

"Playing at CBA has helped me grow so much, as both a basketball player and a person," Cohen said. "My teammates have helped me become a better player, and my coach has helped me through so much over the past three years."

For now, Cohen has his sights on finishing his senior season with a championship.

"I think this team can do something really special and can make a huge run. We have the chemistry, and the talent, to win a state championship," Cohen said.