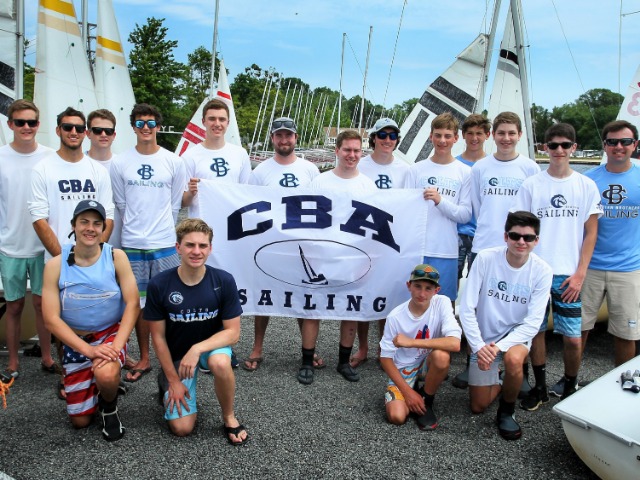 The Christian Brothers Academy varsity sailing team celebrated their 10-year anniversary as a school-sponsored sport this past weekend with a special event in Toms River.

Fittingly dubbed the “10th Anniversary Regatta,” the event brought back alumni from the past 10 years to mix with the current varsity team. With a handful of talented alumni returning, the racing saw some highly competitive, but lighthearted battles between former teammates. The racing was followed by a reception with current and past parents also joining.

High school sailing throughout the state of New Jersey has taken off in the last 10 years, with CBA being at the forefront of the sport’s development at the scholastic level. When the CBA administration gave the program the green light during the 2007-08 school year, there were less than eight other high schools with formalized teams. Today, there are 22 schools throughout the state registered with the New Jersey Interscholastic Sailing Association (NJISA), which was incorporated in 2010 to govern high school sailing in New Jersey. That number has been has high as 26 over the past few years.

The national and regional level has seen a booming increase in high school teams as well. While in United States Interscholastic Sailing Association (ISSA) has existed in its current form since the late 1980s, the sport grew exponentially in the early 2000s, which is when CBA students got their first taste of high school sailing. A group of six CBA sailors self-organized a team and attended regattas around the region, even qualifying for the national championship in 2005. Around that time, the Mid-Atlantic Scholastic Sailing Association (MASSA) was formalized as a regional district to host national championship qualifying regattas. MASSA consists of New York, New Jersey, Pennsylvania, Maryland and Virginia schools, which CBA remains a member of to this day.

The current varsity team typically consists of 16-20 sailors, which is the largest varsity sailing team in New Jersey. They practice three to four times per week at Toms River Yacht Club, using the Ocean County College fleet of 420 sailboats. Championship and invitational regattas are held on the weekends, some of which are hosted in New Jersey and others around the district in New York, Maryland or Virginia.

One of the most unique parts about high school sailing is the connection with college sailing. Many colleges host high school regatta, which has given CBA sailors the opportunity to sail at top-level college venues such as College of Charleston, Massachusetts Institute of Technology, SUNY Maritime College, St. Mary’s College of Maryland, U.S. Coast Guard Academy and U.S. Merchant Marine Academy, among others. Dozens of CBA sailors have gone on to sail at colleges- some nationally ranked- around the country.

With a solid foundation of these successful first 10 years, the future of Colts Sailing is certainly bright.