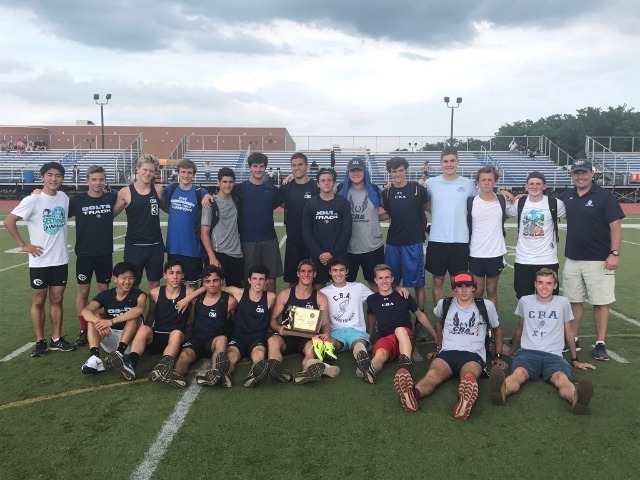 For the incredible 100th time across the three running seasons, Christian Brothers Academy is the NJSIAA Non-Public A State Champions, this time thanks to the outdoor track & field team.

The Colts won the title on Saturday, gritting out the victory by 11 points over second place Union Catholic.

"This year's CBA track team is the hardest working team in the state of New Jersey," head coach Karl Torchia said. "They are incredibly gritty and fight for every point during a championship, as they showed this weekend. In my opinion, they care more than any other team they compete against."

As a team, CBA won both the 4x400m relay and the 4x800m relay. The 4x400 team was Liam O'Hara, Rafael Coppola, Ethan Arce and Canale, while the 4x800 team was John Sheridan, Nolan Kus, Kent Anzano, and McInerney.

The championship is the third consecutive outdoor state title and the 22nd in outdoor history.

"The cross country and track programs have put together an incredible run of championships, something that could very well never be touched by another school," Torchia said. "While this team won the 2018 spring title, it was for the thousands of alumni that have come before them. Decades of hard working athletes set the bar higher for each group that followed. I could spend hours naming all the alumni who won titles with CBA on their chest. This one was for them."

In the fall cross country season, the Colts have won 28 state championships. In the winter season, CBA has 23 overall state titles and 27 relay state victories. And in the spring, the Academy is now the 22-time state champions.

Torchia joined the coaching staff as an assistant to Tom Heath in 2001, a year in which they won the outdoor track state title. He took the reigns of the track program as head coach in 2002, where they won both the indoor and outdoor championships. Since 2001, Torchia has been a part of 49 state championships, 31 as track head coach and another 18 as cross country and track assistant.

"The continued goal of this program is to produce the best quality young men that we can," Torchia said. "I have worked with some of the greatest coaches while at CBA. The current staff is absolutely awesome: cross country head coach Sean McCafferty, Andrew Cusick, Mike Mazzaccaro, and Jarrett Sanderson. I also owe a ton to our retired coaches Dave Duh, Bob Maier, Chris Bennett, and of course, Tom Heath."