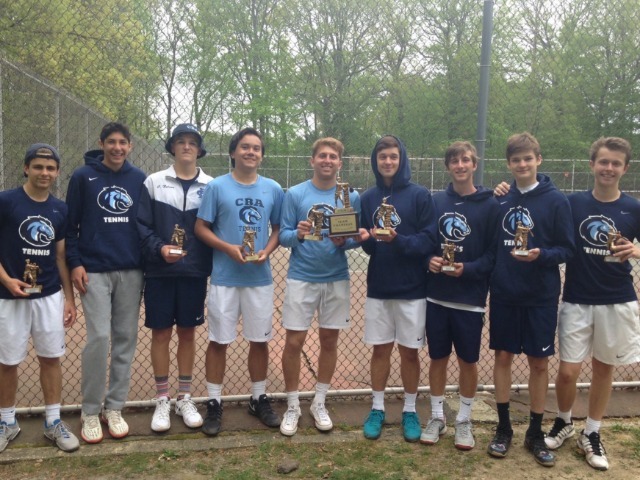 For the second spring in a row, Christian Brothers Academy is the top tennis team in Monmouth County.

The Colts won the Monmouth County Tournament this past weekend, using five top-three position finishes to win the overall title.

In first doubles, senior Christian Pacifico and junior Neil McAlarney were victorious, after roaring back from a 7-5 first set loss. They won 6-2 in the second set, before defeating Holmdel in the third set tiebreaker 12-10.

"A few weeks ago, Neil and I struggled in our only loss to Don Bosco, where we stopped being aggressive and didn't work as pair in the 3rd set," Pacifico said. "Losing that match allowed us to learn how to deal with adversity and not give up on each other. Even being down 5-0 in the first set on Sunday, we had confidence that we could pull out the set. We knew that the team needed us today, and we regrouped by playing our game."

Christian Brothers notched two runner-up finishes as well, Connor Nelson in the first singles and Vito Mazza & Ryan Wolf in the second doubles. Nelson defeated the Colts Neck favorite in the semifinals to advance, but dropped the final match to the defending champion from Holmdel.

Mazza and Wolf won a thrilling third set tiebreaker in the semifinals over Rumson-Fair Haven to clinch a berth to the finals.

"The entire lineup played with courage this weekend," head coach Courter Smith said. "We knew that we needed every point possible, so there was a sense of urgency that we needed to stay focused for entire matches and regroup quickly, if necessary. When we did start slowly, we paid the price by losing first sets, but we came back in each match."

The win at the county tournament is a great start to the most challenging stretch of the tennis season. CBA will play RFH in the Shore Conference Tournament semifinals on Monday afternoon, with the state tournament looming after the conference play concludes.

"The Monmouth County Tournament is so much fun. There's good tennis on all the courts, all of the teams and their fans roaming around and cheering, and every match matters for the team totals," Nelson said. "It marks the beginning of the most competitive part of the season, with the SCT and NJSIAA tournaments. We want to use this weekend as a springboard for the next few weeks."