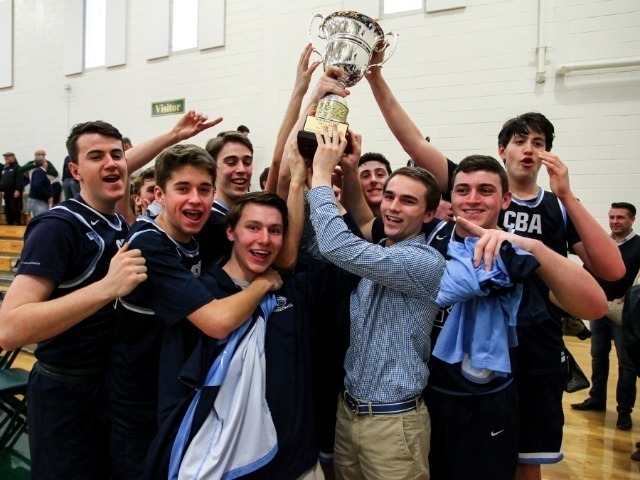 Just five days after the annual Founders' Cup game to end the regular season, Christian Brothers Academy and Red Bank Catholic met on the court again in the Shore Conference Tournament second round on Thursday.

Christian Brothers emerged victorious over their area rival, 73-48, behind hot three-point shooting. Four starters were in double-figures with Josh Cohen leading the way with 19 points and 10 rebounds. Liam Kennedy, returning from a one-game absence, added 17 points and 3-for-3 shooting from long range.

But before they met in the SCT, the Colts traveled to downtown Red Bank to play the Caseys, emerging with a 66-57 victory in rival territory on February 10th.

Playing without Kennedy, who was out with a hip injury, CBA controlled the lead from start to finish with junior center Cohen notching an 18-point, 11-rebound game.

Senior forward Rob Mahala, who recently was named a student-athlete of the month, added 14 points, five rebounds and five assists.

It was the second year of the Founders' Cup series between CBA and RBC. In 2017, the Academy hosted the game with the Colts winning that contest as well.

The Founders' Cup pays homage to the roots of both schools, while demonstrating a strong partnership between two leading Catholic high schools.

Overall, Christian Brothers has now won all five meetings against RBC dating back to 2009. Three of those contests, including Thursday, were in the postseason.

The Colts have found their way back to the top of the Shore Conference this season, thanks to a starting five that averages 57 points per game.

Junior Stephen Braunstein has been the Colts' catalyst on the offensive end all season, averaging over 16 points per game. The scoring guard is shooting 40 percent from three-point range.

Meanwhile, Cohen is averaging a solid double-double with 16 points and 11.5 rebounds.