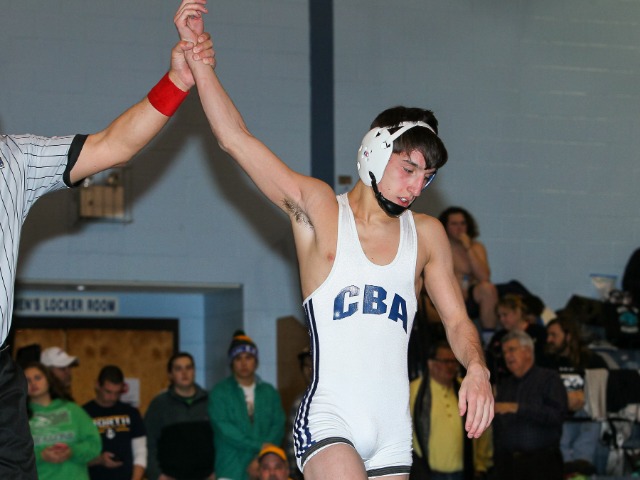 A new format by the conference saw individual seedings decide the team champion, as opposed the dual-meet team tournament format that CBA was crowned champion of in 2016.

Koehler earned the number one seed in the 120-pound weight class based on power points earned throughout the regular season. In the 120-pound finals, Koehler defeated St. John Vianney's Tyler Pepe (8-6) to win the title.

Koehler recorded three pins on his way to the 120-pound finals. He opened the day by pinning his first round opponent from Middletown South, and followed that up with another pin of his quarterfinals opponent from Long Branch. In the semifinals, he made quick work of his Toms River East opponent to advance to the final match.

The individual title win comes nearly two years to the day since Koehler won his 113-pound bout against Howell in the Shore Conference Championship match, which helped Christian Brothers win the Shore team title for the first-time ever.

The 120-pound winner wasn't the only podium finisher for CBA on the day. Senior Cam DiGiorgio advanced to the semifinals of the 220-pound class as the number three seed, losing the third place bout to the number one seed from Raritan and finishing fourth.

Sam La Corte advanced to the quarterfinals as the number seven seed in the 132-pound class. Overall, CBA had seven participants in the tournament.

The Colts will finish up their final regular season matches, ahead of the District 24 Tournament on February 17th. CBA has won three District Championships in team history, all in the past four years.