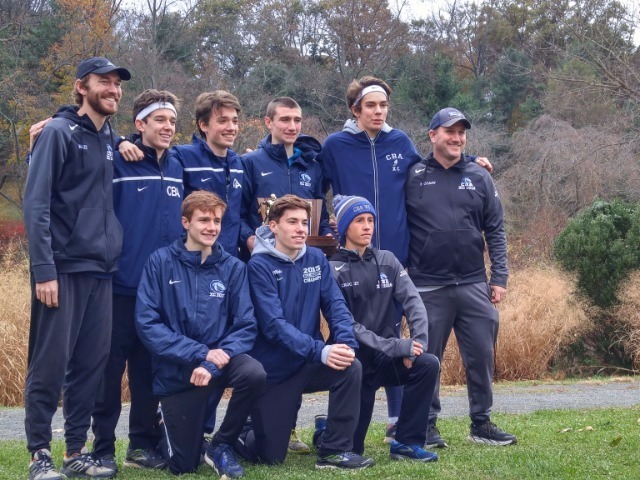 One year ago, the CBA cross country team found themselves in a peculiar spot: not on the first place podium at the NJSIAA Meet of Champions.

The Colts’ seven-year winning streak against New Jersey’s best was ended by Princeton High School in November 2016, leaving a talented CBA team- one that would finish seventh at the National Championship- short of a major goal.

The 2017 edition of CBA XC was determined to switch the narrative, and they did just that this past Saturday at Holmdel Park.

The Colts won the 2017 Meet of Champions title by 16 points over Kingsway High School, returning the Academy to the top spot for a state record 22nd time.

Senior Brian Hill continued to lead the CBA pack, finishing fifth in the race. Juniors Luke Reid and Tim McInerney were 26th and 32nd, while seniors Ryan Miele and John Sheridan rounded out the top-five at 36th and 41st, respectively. Troy Hill and Tanner Crochet completed the championship team. The CBA team averaged 16:24, about six seconds better than Kingsway.

“Our top seven today ran with their hearts and really came up with a big win,” head coach Sean McCafferty said. “John Sheridan was our hero today. He ran the race of his life to pull us along.”

The victory was also McCafferty's first title as head coach at the Meet of Champions. The second-year head coach joined his father, Al, as the first father-son duo to coach teams to MOC wins. The elder McCafferty won the 1973 title with St. Joseph's (Metuchen).

As the Colts now prepare for the upcoming Nike Northeast Regional, the Nationals qualifier, LetsGoColts.com spoke to the CBA five about bringing the all-groups championship back to Lincroft.

Q: AFTER THE TEAM FELL SHORT OF THIS GOAL LAST YEAR, HOW DOES IT FEEL TO BRING THE ALL-GROUPS TITLE BACK TO CBA?

Brian Hill: “Meet of Champs is always an important building block during championship season and missing that title last year definitely had a negative impact on our 2016 championship season. It’s important to take care of your home state first before progressing on to regionals, and doing that has given us more confidence.”

Ryan Miele: “I was one of the members on the team who lost the Meet of Champions last year. That loss fueled this team all year to work harder and pushed us to go the extra mile everyday in practice. It is truly an amazing feeling to be apart of the legacy along with the 21 other teams who brought the MOC title back to CBA.”

John Sheridan: “It obviously is amazing to bring something this important back to CBA, especially with the amount of students and alumni at the meet on Saturday. The crowd support was something I never expected, and I think that shows just how much it means for CBA to hold this title again.”

Q: BECAUSE OF LAST YEAR’S RESULT, DID YOU FEEL ANY MORE PRESSURE GOING INTO THIS RACE?

Tim McInerney: “Going into the race, we knew that Kingsway was going to be very difficult to beat. So in that sense, yes, there were a lot of eyes on us this year, especially with the usual target that we have on our back. But aside from [the external pressure], each one of us knew how well prepared we were.”

Miele: “There was a ton of pressure on our team leading up to the race. All we had heard about [this race] for the past year was how we lost MOC [in 2016]. We did not want that to happen two years in a row.”

Hill: “Twenty-two CBA teams have won the meet of champions, and as of right now, that is our biggest accomplishment this year. The next two weeks will determine if we will become an upper tier CBA team. It is too early to tell at this point, but given the success we have had up to now, I believe we are on the right track.”

Luke Reid: “I think this 2017 team is so special because we are pretty young. Usually, the team is mostly built with seniors, but we have four non-seniors in our top seven this year. We also have three non-seniors still in the hunt for that seventh spot. So, we will have some very strong returners for the next few years.”

McInerney: “CBA XC is without a doubt one of the most storied programs in the United States. There is always a reputation to live up to, and that is truly a great thing. On the other hand, this team that we have this year is invested in the ultimate goal. We aren’t just teammates, everyone is incredibly close.”

Q: WITH NIKE NORTHEAST REGIONALS AND THEN POTENTIALLY NATIONALS AHEAD, WHAT IS YOUR PERSONAL MINDSET COMING DOWN THE STRETCH OF THIS FALL?

Hill: “Personally, I underachieved at the Meet of Champions and I am looking to rebound this weekend and contend for the win at regionals. All it takes is the right mindset and mental toughness for me to accomplish my goals. My race at MOC was a wake-up call for me and after the race it hit me that I only have at most two more races left representing CBA.”

Sheridan: “These next two weeks are what we have worked for all year. In my opinion, our team has all of the tools we need. We just need to take it one meet at a time. We need to maintain our focus, which is something we have been doing extremely well, and simply need to keep being CBA. Two more weeks, that’s all we have left.”

Q: FINALLY, WHO ARE SOME PEOPLE WHO HAVE MOTIVATED THIS TEAM TO BE GREAT?

Reid: “I would say all three of our coaches, Coach McCafferty, Coach Mazzacaro, and Coach Torchia, have motivated us a lot this year. Coach McCafferty always tells us that if we work hard enough, we have the talent to bring home a national championship. Also, I’d say that last year’s graduating class has motivated us to big things this year. They want to see us win a national championship, so they have been motivation for us all season long.”

Miele: “I would say that we are motivated by the former runners of CBA. We know that every time that we step up to the starting line with those three letters across our chests, we are not just running with our teammates, but we are running with all of our brothers who ran before us. We are all aware of the strong tradition and legacy that this program has and it is humbling to be a part of it.”

Sheridan: “Other than the actual coaches, I think that the most influential person to the team this year has been Mr. Heath. He coached Hill, Miele, and I for our first two seasons, so he knows exactly what we are capable of. He has come up to me in the hallway a few times this season to congratulate me- or critique me- which has really inspired me to do something special.”

The Nike Northeast Regional Championship goes off this Saturday at 12:40 p.m. in Bowdoin Park (NY).