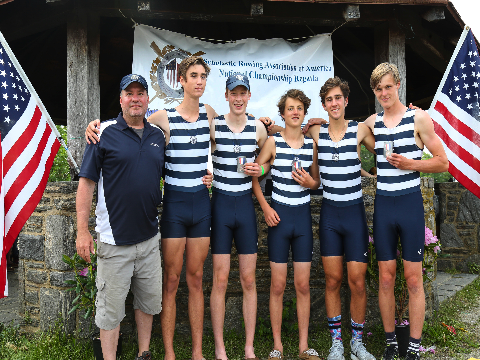 The Christian Brothers Academy crew team completed their year at the 2017 Scholastic National Championships this past weekend.

The Colts sent two varsity boats to the Nationals, the varsity 4 and the lightweight 4, along with the JV 4, JV 8 and a freshmen boat. The lightweight 4 finished third in their division, while the JV 8 also took a bronze medal.

The trip to the Nationals caps a great spring for the Colts, highlighted by the varsity 4 winning the prestigious Philly City Championship for the first time in team history.

Both the varsity 4 and lightweight 4 boats finished second in their divisions at the Stotesbury Cup, one of the largest regattas in the country.

At the Garden States, CBA took wins in the varsity 4 and lightweight 4, as well as a freshman boat winning their division. The JV 4 and JV 8 both finished top three.

The major regatta performances came after a solid Manny Flicks Series in Philly, where the Colts dominated many of the days, including one where they won all five races they entered.

CBA will hit the water again come September for the fall season.