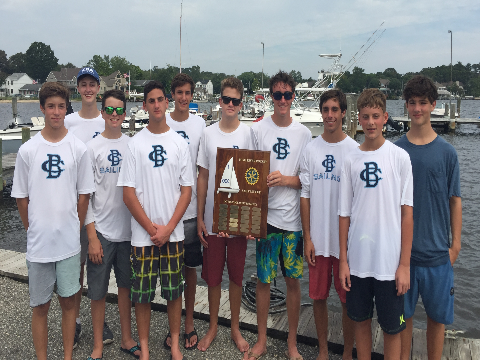 After closing out the 2016 spring season with a win at the state championship, the Christian Brothers Academy sailing team wasted no time securing their first win of the new school year. The Colts won their third consecutive Sailfest Cup- the annual kickoff to the high school sailing season- on Saturday at Toms River Yacht Club.

CBA, which fielded two teams on the day, faced 12 other New Jersey teams at the 12-race event. After grabbing a double-digit lead midway through the regatta, CBA held off a late charge by second place Southern Regional to secure the victory. Donovan Catholic, Rumson- Fair Haven and CBA's team two rounded out the top-five.

The Colts were led by junior Michael Ehnot and sophomore Ryan Mullins in the A Division. Ehnot and Mullins won two races on the day to finish second in their division. Juniors Garrett Boyan and Joe LaForgia, with sophomore Justin Modin, won the B Division by winning three of their six races.

The Colts now turn their attention to the heart of their fall schedule, which includes the League Championship in Toms River on October 1st and the District Championship (Fort Monroe, Virginia) in mid-October.