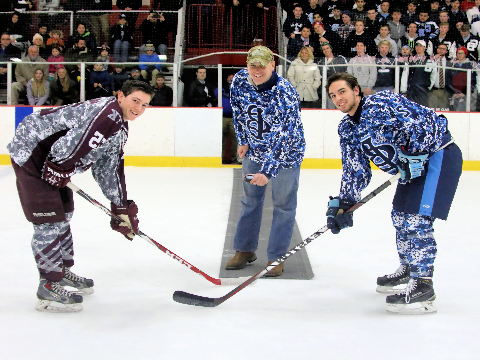 On Wednesday, January 6, a pivotal Gordon Conference hockey match-up between Christian Brothers Academy and Don Bosco Prep was merely a backdrop to a great cause.

Over the course of the night, CBA and DBP celebrated the armed forces during Military Appreciation Night at CBA's home ice, Jersey Shore Arena in Wall. And as usual, the CBA community, with support from the DBP hockey families, rallied around an important cause.

All proceeds of the night went to the Lt. Dennis W. Zilinski Memorial Fund, the charitable organization named for the CBA alum who courageously died in military action while serving in Iraq. The foundation's goal was to purchase a service dog for a veteran that was suffering from PTSD, which costs about $15,000. At the end of the festivities, the count had surpassed $15,000 by a long shot.

The evening featured two state hockey powers, and over the course of the game, CBA took donations at the game entry in exchange for a ticket, sold 50-50 raffle tickets and raffled off a signed jersey by CBA alum and NHL Stanley Cup champion Trevor van Riemsdyk.

Special "Military Appreciation Night" t-shirts were also sold during the game, which were generously donated to the cause by Athletes Alley in Shrewsbury.

After the conclusion of the game, CBA held a post-game reception for CBA hockey families and friends, where there was an auction for the limited-edition camouflage Colts jerseys.

"This game represented everything that sports should be about," Director of Athletics Vito Chiaravalloti said. "Two rival teams on the ice, rising about their competitive differences for a greater cause- to honor the brave men and women who serve in our armed forces. I could not be more proud of the way CBA and DBP communities supported this important effort."

While the action on the ice was pivotal for conference standing, both CBA and DBP should be more proud of the contribution their hockey game could make to a greater cause.