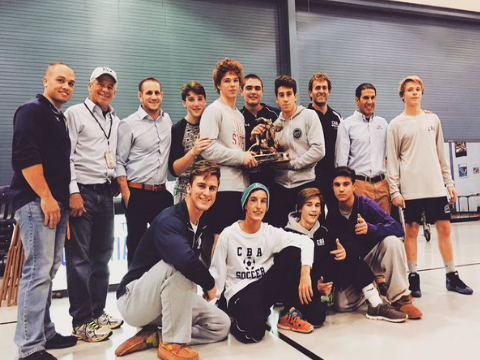 The 23rd annual Colt Classic wrestling tournament came down to the wire, and in the championship round, the CBA boys delivered.

CBA was crowned champions of the 11-team tournament, after a come from behind effort to overtake Wall Township in the finals.

While the Colts put six wrestlers in the finals compared to Wall's five, Wall had placed higher in the previous rounds, giving them a nice lead over CBA heading into the decisive round.

Junior Nick Schutzenhoffer (106 lb.) and senior Dylan VanSickell (132 lb.) both won their bouts to draw closer to Wall, while in other action, High Point overtook Wall for the overall lead.

With CBA needing to win both of the last two championship matches, senior Jack LaCorte stepped onto the mat against Wall's state finalist Matt McKenzie in the 195 lb. division. After three overtimes, LaCorte came out as the winner, which made senior Will Oxley's bout the deciding factor.

Oxley, who was giving up about 50 pounds to his opponent, powered his Pinelands heavyweight division opponent to his back on a fall, which awarded him the victory and gave CBA the two extra points they needed to win the overall title.

CBA finished with 172.5 points, while High Point was second with 168.5 and Wall was third with 159.5. LaCorte was named the tournament's most outstanding wrestler.


A total team effort led to CBA's first Colt Classic title since 2011, kicking off the new season in the most dramatic fashion.