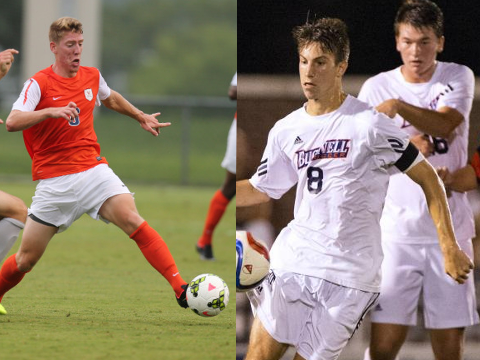 Thorsheim, who hails from Manalapan, N.J., was named to the MAC Hermann Trophy Watch List in the lead up to the 2015 season, his senior season at Bucknell He started all 18 matches for the Bison this year, finishing fourth in the Patriot League in points, and fifth in both goals and assists. He totaled 80 career games for Bucknell with 20 goals and 18 assists. He was a three-time All-Patriot League honoree, including back-to-back nods to the First Team.

Thorsheim was a member of the unbeaten 2014 New York Red Bulls U-23 team that won the NPSL National Championship. He scored four goals that season and returned to the U-23 squad again last Summer, scoring another four in 11 appearances in the PDL. Prior to Bucknell, he played for the Red Bulls U-18s.


Thomsen, from Brick, N.J., played 66 career matches for Virginia, including 56 starts as both a midfielder and defender. He battled injuries his senior season which limited him to playing five games, but was one of 30 candidates for the Senior CLASS Award. In past years, he earned ACC All-Academic Men's Soccer Team honors twice, made the ACC Academic Honor Roll three times and won the NCAA Championship in 2014. Thomsen finished his college career with three goals and 18 assists, leading his team in helpers during his freshman and junior years.

Like his fellow signees, Thomsen spent Summers with the Red Bulls U-23s, winning the NPSL title in 2014 and scoring three goals and three assists in 14 appearances in 2015. Prior to Virginia, Thomsen was a member of the Red Bulls U-18 team, and spent time with the U.S. Under-18s as well.