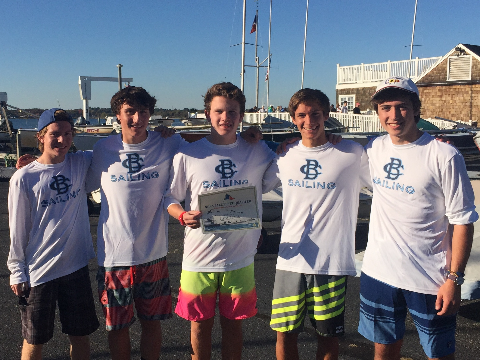 Continuing their streak of big regatta victories, the CBA Sailing team won the 2015 NJISA League Fall Championship on Saturday, October 10 at Shrewsbury Sailing & Yacht Club. The Colts battled 12 other area schools for the title, contesting with shifty breeze and rapidly changing conditions throughout the day.

The B division team of Michael Ehnot '18 and Mark Iorio '16 put CBA in control, winning two straight races midway through the day to give CBA a lead they wouldn't relinquish. Toms River North made the Colts sweat with a late day comeback, but CBA held on for the victory as the breeze died. Southern Regional finished third and Rumson-Fair Haven Regional was fourth.

Joe LaForgia '17 and Chris Magno '17 won the A division, winning the first race of the day and never finishing lower than fifth in a race. This is the third consecutive league championship for the Colts, having won the 2014 fall title and the 2015 spring title.

CBA now looks forward to national competition to end the fall season. The team will head to the Coast Guard Academy National Invitational Regatta in New London, Conn. on October 17-18, followed by the Charleston Intersectional Regatta in Charleston, S.C. on November 7-8.