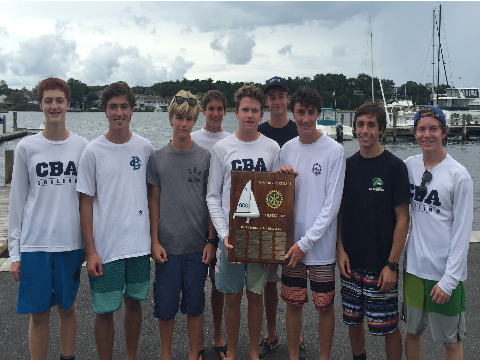 After concluding the spring season with a state championship title, the varsity sailing team picked up right where they left off, with a victory at the annual Sailfest Cup in Toms River on September 12. CBA, who also won the Sailfest Cup in 2014, won by 10 points over second place Summit High School and 23 points over third place Donovan Catholic.

The Colts were led by junior skipper Joe LaForgia and junior crew Chris Magno in A Division, while sophomore skipper Michael Ehnot and senior crew Mark Iorio won B Division with four first place finishes in six races. Also on the water for the Colts were JP Burgess '16, Greg Degersdorff '16, and Jonathan Wilhelm '17 in A Division, and Garret Boyan '17 and Robert Maes '17 in B Division.

The Colts now turn their attention to the NJISA Fall Qualifier on October 10 in hopes of advancing to the Mid-Atlantic District Fall Championship in Norfolk, Va. on October 17-18.