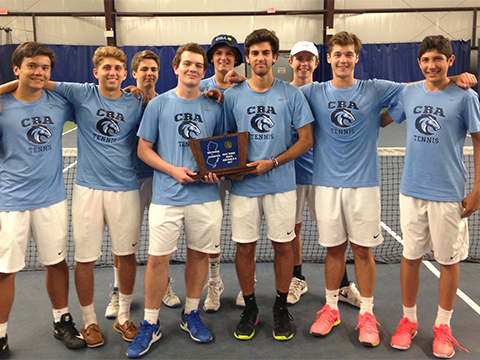 The Colts won the championship by dominating rival St. Augustine Prep, as CBA took wins in each match.

On the singles side, freshman Kyriacos Petrou recovered from a first game loss to rattle off 12 straight game wins, taking his match 6-1, 6-0.

Senior captain Sean Reilly followed Petrou's lead in the second singles match, running through his first set (6-1) before overpowering his opponent in the second set (6-3).

With a chance to wrap up the title before the doubles teams even took the court, sophomore Connor Nelson won his first set in a tiebreaker by winning the last five points (7-2). Nelson battled in the second set, eventually pulling ahead and securing a 6-4 win, and ultimately the title for the Colts.

The doubles teams did not let the CBA momentum stop there, as the second doubles tandem of Neil McAlarney and Christian Pacifico won 6-1, 6-3. The first doubles squad of Andrew DeMaio and Matt Jaworski also took care of business (6-2, 6-0) to complete the CBA sweep.

"We really wanted to make sure that Sean [Reilly] and Andrew [DeMaio] got a NJSIAA title," Nelson said about the seniors on the team. "They have done a lot for the program, and adding to the program's history is important."

The Colts can add to the program's history when they vie for the Non-Public State Championship on Wednesday afternoon at Mercer County Park.