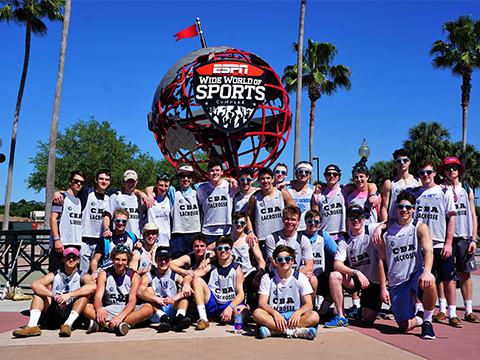 Taking advantage of the week off of school ahead of their Saturday home opener, Christian Brothers Academy Lacrosse trained for three days at Disney's ESPN Wide World of Sports in Orlando, Florida.

The Colts arrived in Florida late last Friday night, before beginning their warm weather training on Saturday at Disney. CBA had a double practice session on Saturday and another three-hour practice on Sunday.

On Monday, the Colts were able to have an intra-squad scrimmage at Disney, with Nick Robertson leading the white team to a 12-5 victory.

The main event of the trip was a game against Florida's famed IMG Academy on Tuesday afternoon in Bradenton, Florida. IMG is currently ranked No. 11 in Under Armour's high school lacrosse poll. Of course, CBA didn't back down from the challenge, staying competitive throughout the game. Although the Colts ultimately fell 14-6, Nick Casner scored two goals and added two assists and the defensive platoon was anchored by Jack Koury and Clinton WIlson.

The trip was not without some off-the-field team bonding. The players and coaches visited the Magic Kingdom park on Sunday night, where the team enjoyed rides such as Space Mountain and Splash Mountain. On Monday night, the Colts took their talents to Hollywood Studios to face the famed Tower of Terror ride.

Before their departed for the airport on Wednesday, Nick Casner was victorious in the team's "Disney Mini-Golf Masters."

The training trip was in advance of Saturday's home opener against Neptune at 10 a.m. Saturday's game will begin a stretch of six games in 12 days for the Colts.