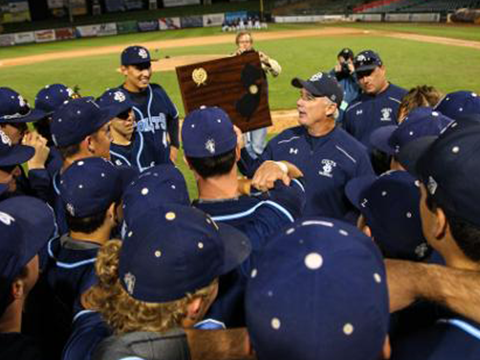 After graduating a senior class of double digits, Christian Brothers Academy Baseball will open up a new era on Monday, as CBA will host Freehold Boro at the Academy. LetsGoColts.com is getting you ready for a fresh season of Colts Baseball!

History was made in bunches for CBA Baseball in 2016. The Colts became the first team to win three straight Monmouth County Tournaments and three straight Shore Conference Tournaments last season. Then-senior pitcher Luca Dalatri set the Shore Conference record for most wins in conference history, posting his 35th and final win in that Shore Conference Championship. Dalatri was also named New Jersey Gatorade Player of the Year for the second straight year. Both Dalatri and then-senior catcher Brandon Martorano were both selected in the MLB Draft, but both chose to play baseball at the University of North Carolina. Overall, CBA finished the season 21-9.

While the historic senior class is gone, several returning Colts gained valuable experience last season. Junior outfielder Nick Hohenstein and junior third baseman Andrea Dalatri will be the offensive leaders for CBA as the season gets underway. First baseman Brian Golden and catcher Joe Sparber will provide the senior leadership. There's no shortage of young blood, either. Sophomore shortstop Tommy DiTullio will look to make an impact at the plate, while juniors like John Dudek, Eddie Dudek, Matt Fitzsimmons and Mike Martorano will also see more at-bats in 2017.

As for the pitching platoon, juniors Matt Barnes, Connor Baksh, Perry Quartuccio, Jake Lawrie and Blaise Venancio will take the mound. Both Hohenstein and Dalatri could also see time on the rubber.

As the returning offensive force in the Christian Brothers lineup, Nick Hohenstein was listed twice in NJ.com's preseason individual rankings. The junior was tabbed as one of the top-30 hitters in New Jersey this season, after battling .371 with 22 RBIs in 2016. Hohenstein also was listed as one of the top outfielders in the state. This is even without mentioning his 25+ innings and a 1.64 ERA on the mound last season.

Follow the Colts throughout the season with the best high school social media network in the nation!

And for complete schedules, rosters and news, visit CBA Athletics on the web at LetsGoColts.com.