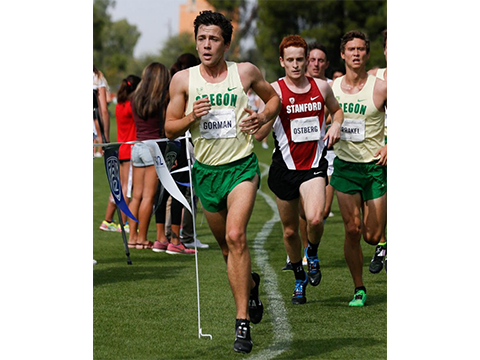 The running programs at Christian Brothers Academy have had countless alumni go on to have great careers at Division I colleges around the country.

Only one can say he has recorded a sub-four minute mile on the track.

University of Oregon's Tim Gorman (CBA '12) became the first CBA alumnus to post what is considered a tremendous feat in the running world: one mile on the track in less than four minutes. He accomplished the feat at the University of Washington's Husky Classic last week (3:58.80).

"Breaking four minutes is a dream every miler strives towards, but so few have the support, opportunities, and luck to see it realized," Gorman told LetsGoColts.com in an email interview. "For me, it represents the culmination of years of dedication. All of the sacrifices made, the early mornings, the runs that didn't come easily, the bouts of injury, and the good fortune have brought me to this concrete, historically significant realization of potential."

Gorman graduated from Dartmouth College last spring and decided to use his extra year of eligibility to transfer to one of the top running schools, the University of Oregon. He capped his Dartmouth career by finishing third in the mile at the 2016 Ivy League Indoor Championships.

Now at Oregon, Gorman looks to end his collegiate running career on the biggest stage.

"My goal this year is to score as many points as possible to help the University of Oregon win Pac-12 and NCAA titles," he said.

Oregon has won seven NCAA Division I Outdoor Championships, the fourth most all-time, so Gorman's goal is certainly within reach. However, Gorman has a bit of national championship experience already, as a member of the CBA team who won the 2011 Nike Cross Country Nationals.

"The coaching that I had at CBA was world-class for any level," Gorman said. "I was given the guidance to love my sport and to pursue lofty goals the right way. While running for CBA, I was driven by tradition to reach great heights. I chased the ghosts of the runners who came before me and measured my success against the success of my historical counterparts."

But aside from running, Gorman believes CBA has helped him succeed in every aspect of his life.

"There is no way that I would be where I am had I not gone through the Academy," he said. "My mentors at CBA expected excellence from me in every aspect of my life. I was taught to be a leader athletically, academically and socially, and I have been able to carry those traits into all of my pursuits."

Gorman, who was already considered one of the top runners in a long list of CBA greats, now stands alone as the only one to accomplish this impressive feat, something he will forever cherish.

"I have the utmost respect for CBA's running history and to be the first alumnus to break four minutes in the mile is one of the greatest points of pride in my life."