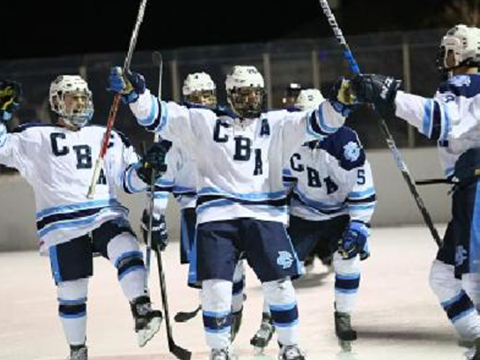 The Christian Brothers Academy hockey team was not going to let another special matchup with rival Don Bosco Prep slip away.

One month after dropping a tough Military Appreciation Game, the Colts got their revenge on the Ironmen in the 2017 CBA Winter Classic at the Navesink Country Club outdoor rink. CBA scored three goals in the third period to notch a 3-1 win.

In the first CBA Winter Classic game since January 2015, the Colts and Don Bosco skated a close, competitive game for the duration. Although CBA led in shots on goal- and had multiple near misses- through two periods, it was the Ironmen who got on the board first with 1:37 remaining in the second period.

The final frame proved to be an exciting one for Christian Brothers as the wind began to whip up and the temperatures plummeted at Navesink. With eight and a half minutes left in the third, senior Cory Clifton tapped the puck in off a wild ricochet to tie the game at one a piece.

The two teams swapped sides midway through the third period to even out which team skated into the increasingly cold wind. After the switch, senior Will Egbert found the back of the net off an assist from junior Nicholas Lidondici with two and a half minutes remaining, which proved to be the clinching goal for the Colts.

Senior Derek Contessa added a security goal for CBA with just over a minute remaining.

The Colts are now 7-2-2 on the season with a visit to Saint Augustine coming up on Friday, January 6th.