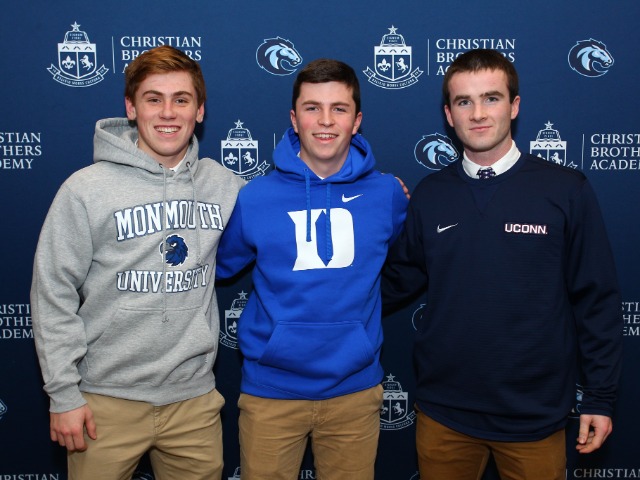 Three Christian Brothers Academy seniors made their commitments to play soccer at Division I universities official on Wednesday afternoon.

John Askin (Monmouth University), Shane Keenan (University of Connecticut) and Conor Kelly (Duke University) happily signed their Letters of Intent on what is National Signing Day for soccer across the country.

“I want to congratulate these three outstanding student-athletes and their parents on this very special day,” Director of Athletics Vito Chiaravalloti said. “Many players dream of the opportunity to play at the next level, but only a select few get the chance. This privilege that Shane, John and Connor are now afforded is a testament to their tremendous efforts in the classroom and on the field.”

Both Askin and Keenan were major factors in CBA finishing as state finalists for the third straight year. The Colts were ranked 12th on the east coast by Top Drawer Soccer, a leading national scholastic publication. The Colts also were 10th in New Jersey by NJ.com and 2nd in the Shore power rankings by Shore Sports Network.

Askin was a two-year starter for the Colts as an impressive defenseman. As a junior, He was a critical piece to Christian Brothers’ state championship shutout victory over Seton Hall Prep in 2016, as well as scoring a goal during the Colts’ 2016 Shore Conference championship game win. In 2017, the senior captain was selected as a second team all-state player by NJ.com and an all-Shore player by Shore Sports Network.

Keenan joined the CBA varsity team this past fall and immediately made an impact for the Colts as a goalie. Alongside Askin and the rest of the defensive line, Keenan helped set a new program-record with 16 shutouts. He was selected to play in the U.S. Soccer High School All-American Game in December.

“It is always a privilege to be able to coach players like John Askin and Shane Keenan,” CBA head coach Tom Mulligan ’83 said. “The entire CBA community is proud of their contributions and accomplishments while representing CBA as student-athletes. Playing soccer at the Division I level is the dream of most high school players, and I’m thrilled that these two deserving players will get the opportunity to experience soccer at the next level.”

Mulligan was most impressed by the development of Askin, who was a two-sport athlete playing CBA baseball for multiple years, over the course of his CBA soccer career.

“I have witnessed John develop into a special player over the past 3 years,” Mulligan said. “John developed from an athletic JV player, to a starting defender on our nationally ranked 2016 team, to our captain this year, and now he is a Division I player. But, he will certainly be most remembered for his desire to represent CBA both on and off the field.”

Keenan was a special talent in a CBA program that has a history of great goalkeepers. In addition to his national honors, he was an all-state first team selection by NJ.com this fall as well.

“Shane ranks among one of the best goalies to play for CBA,” Mulligan commented. “I’m thrilled that Shane was able to experience CBA soccer this year, and he now says it was his most memorable soccer season of his young career.”

Kelly will head to the Duke campus in North Carolina after spending three seasons playing for the Cedar Stars Academy.

The Academy will host one final signing day in April when the regular signing period begins.