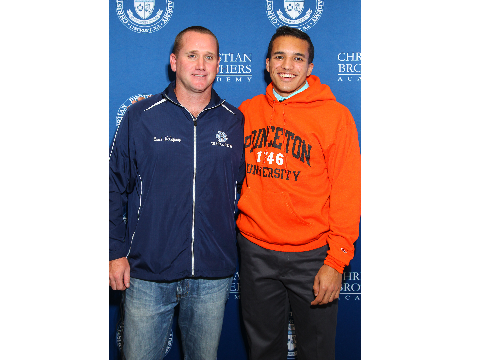 "This is an extremely exciting day for the CBA running community," Director of Athletics Vito Chiaravalloti said. "The hiring of Coach McCafferty ensures that one of the most successful high school programs in U.S. history will have a bright future. We have been so fortunate to have someone with his coaching credentials and character on our staff for the past two years, and it is only fitting that he be the man to lead our storied cross-country program going forward."

With the Colts, McCafferty has implemented new training regimens for cross country distance runners, while also serving as an assistant for the winter and spring track seasons. He coached the CBA distance team as they qualified for the Penn Relays this season. McCafferty will continue as an assistant track coach at CBA.

"The CBA cross country team is tremendous," McCafferty said. "The student-athletes on the team strive to help their brothers in blue succeed in every aspect of life. The combination of their winning desire with a supportive school, strong spiritual community and caring parents makes it clear that the children of this team are prepared for success from day one. I am tremendously excited to help this team continue to improve every day, season and year."

A 2001 Princeton University graduate, McCafferty was a three season athlete for the Tigers, running Division I cross country, indoor and outdoor track. He won the Princeton Track Award for Dedication in 2001. He used an extra year of eligibility to run for Rutgers University's cross country and track programs in 2001-02.

In 2004, McCafferty was hired as the head cross country coach and assistant track coach at Holmdel High School. He led the Holmdel team to new heights during his ten years at the school, qualifying for the 2008 Foot Locker National Championship and winning the 2011 and 2012 NJSIAA Cross Country State Championships in group two.

"Sean's reputation in the running world is second-to-none and his commitment to both his craft and his athletes is inspiring," Chiaravalloti said. "I could not be more optimistic for the future of our running program with Coach McCafferty at the helm."

Outside of his work at CBA and Holmdel, McCafferty has founded and helped run multiple private running camps. He is the founder of the Horse Farm Running Camp for high school cross country athletes, while also assisting with the Jersey Speed Running Camp, which was founded by CBA track head coach Karl Torchia.

"I couldn't have thought of a better person for the cross country job," Torchia said. "Sean McCafferty is a very talented coach with a knack for winning. He cares about CBA and our long-standing tradition, always putting his athletes first."

Heath announced his retirement after 44 years at the helm of Colts cross country in December. Heath, a 1965 CBA graduate, returned to his alma mater to coach a sport he himself did not participate in. Years later, he would cement a legacy as one of the greatest high school coaches of any sport in United States history. His accomplishments as a head coach includes a national record streak of 343 consecutive dual-meet wins, 21 New Jersey All-Group titles, a 2011 Nike National Championship and a lengthy list of athletes that went on to compete at the Division I level. CBA will hold a day honoring Heath's career on Monday, April 25th in conjunction with a home track meet.

"Following in Tom Heath's footsteps will not be easy, but Coach Heath has built an amazing, winning atmosphere and has been incredibly supportive since his retirement. I gladly accept the challenge," McCafferty said.

With McCafferty now leading the Colts, the program will look to continue the excellence established by Heath and carried on by decades of dedicated runners.