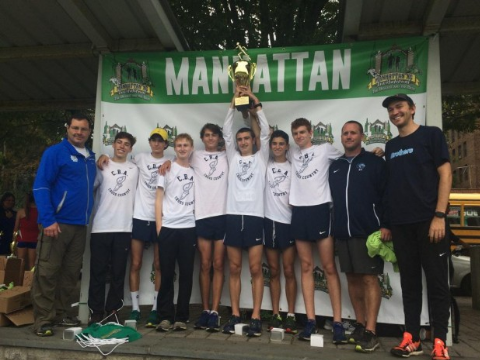 The Colts won the title for the first time since 2013 with a 13:12 average on the two and a half mile course.

Junior Brian Hill was CBA's top finisher in 12:42, while senior Riley Gardner stepped up in the place of the injured seniors Drake Anzano and Noah Yuro to finish as the Colts' fourth man. Seniors Geno Anzalone and Colin Trigani finished second and third for CBA, respectively.

The Colts were trailing Princeton High School after each team finished four runners, but junior Ryan Miele finished 23 places ahead of Princeton's number five runner to clinch the victory for CBA.

Meanwhile, CBA took home wins in both the sophomore and freshmen races as well.

Christian Brothers is currently ranked number one in New Jersey and number five nationally. They will next race on Thursday afternoon, looking for their 350th straight dual meet win against Howell High School.