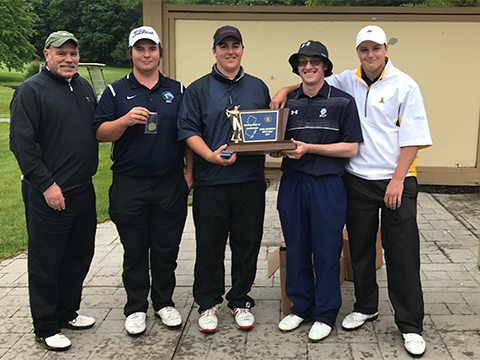 For the first time since 2013, the Christian Brothers Academy golf team reigns supreme over the state of New Jersey.

The Colts won the NJSIAA Tournament of Champions on Monday at Hopewell Valley Golf Club, making them the undisputed 2017 state champion. By winning the overall championship, CBA also was named Non-Public A champions.

CBA defeated NJ.com #1 Bergen Catholic, 297-302, to win the championship. It's the eighth Tournament of Champions title for the Colts.

Even more remarkable, CBA's 297 score is just the fourth sub-300 score at the Tournament of Champions since 2000, and the Colts did it in a driving rainstorm for most of the day. CBA now owns three of the four sub-300 scores at the TOC.

CBA had three individuals in the top-six overall, with senior Chris Gotterup and sophomore Jack Wall both shooting a 71. Sophomore Brendan Hansen shot a 72, while senior Manny Lazzaro shot an 82.

Ironically, Gotterup and Wall tied for first in the Non-Public A individual standings, which required a three-hole playoff to determine a winner. The two teammates then matched scores on those three holes, which sent them back to play another three holes. On the final hole of the second go-around, Gotterup birdied, only to watch Wall eagle the hole to become Non-Public A individual champion.

"It's fun. We always have a good time when we play together," Gotterup told the media after the teammate playoff. "One of us is going to win, and we don't care who that is. We both played well, Jack hit an eagle and I'll happily lose on an eagle, what are you going to do?"

The overall state championship completes a remarkable season for CBA. The Colts went 16-0 in the regular season and won the Monmouth County, Shore Conference, South Jersey Sectional, Non-Public A and TOC titles.

"Winning the Tournament of Champions was the icing on a very big and wonderful cake," head coach Tim Sewing said. "The best thing about this team is the quality of the individuals. To a man, seniors Chris Gotterup, Kyle Hayes, Manny Lazzaro, Ben Steenland, juniors Johnny Krall, Mike Paduano, sophomores Brendan Hansen, Randall Lazzaro, Matt McCormick, Jack Wall, and freshman Finbar Bonner all answered the bell whenever called upon. CBA played a great many different lineups throughout the season. Depth was one of the team's greatest strengths."